Singles with most weeks at the #1 position: 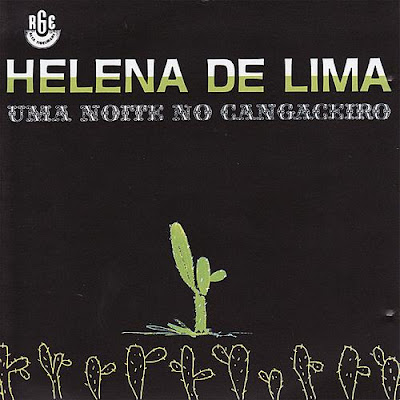 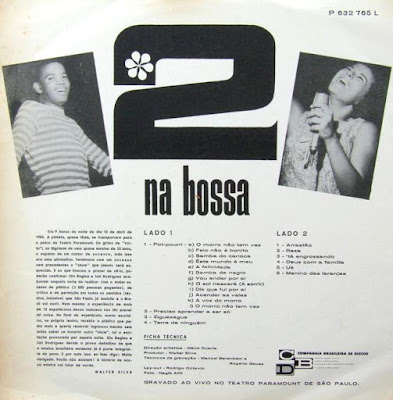 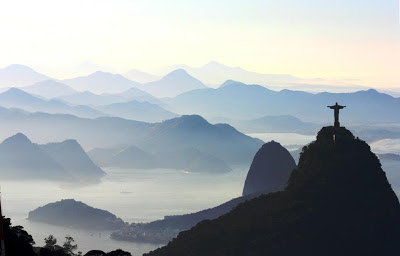 There were some differences between Rio & Sao Paulo record markets but not many. When it comes to single-of-the-week Rio de Janeiro had 2 acts who got to the top but never made it in Sao Paulo: Roberto Müller's 'Nunca mais brigarei contigo' (12 June), Marco Antonio's 'Um par de alianças' (29 May). British group The Animals went to #1 on 15 May with 'The house of the rising sun' in Rio but not Sao Paulo.

Fernando Lelis's EP 'Está morrendo o nosso amor' (25 September), Orlando Dias's 'Sinfonia da mata' (12 June) and Silvinho's  'Quando eu andava perdido no mundo' (17 July) never made it to S.Paulo's charts. Orlando Dias and Silvinho had been consistent chart makers nationally in '61, '62 and '63 but now they were left-overs from a distant past that only survived in Rio.

If you follow 1965 Guanabara Albums' chart you'll notice that 'Roberto Carlos canta para a juventude' the ground-breaking album by future chart-buster Roberto Carlos entered the charts on 22 May but did not stay in the top 5 for too long as opposed to Sao Paulo where it sold consistently for the rest of the year. That proves that even though Roberto Carlos was originally from Rio (born and raised in the state of Espirito Santo north of Rio) he made himself a career out of Sao Paulo.

The other striking difference comes around  Carnaval which is a special time in Cariocas' life style. They usually bought records connected with this festivity while Sao Paulo was getting colder and colder towards it.

Even though there was a Military Coup against democratic-elected President João Goulart in April 1964, not much had changed in the pop world one year later. 1965 turned out to be one of the best years ever for Brazilian Popular Music. Actually, 1965 was the year the acronym MPB - Musica Popular Brasileira (Brazilian Popular Music) was coined.

1965 was the year The Beatles finally broke through in Brazil with their 'A hard day's night' sound-track. Trini Lopez was king either singing in Spanish ('Perfidia') or English ('Michael'). Elis Regina was the new queen of Brazilian music and Roberto Carlos the king of the teeny-bopper set.

Not withstanding having a right-wing Military Junta in power it was in 1965 that protest songs with a heavy left-wing content were at its best. 'Carcará' was a defiant song about the injustice perpetrated by the old Brazilian oligarchy (former slave-owners) against the poor and destitute.

Italian music was still strong even if not as massive as in 1964. French modern music made some inroads especially with Alain Barrière, Charles Aznavour, Dalida and Richard Anthony.

Movie sound-tracks were not as strong as in previous years but 'The sound of music' (Noviça Rebelde), 'My fair lady' and the marvelous 'The Pink Panther' sold a lot.

The young set was getting bolder but the 'old guard' still had enough money to buy heaps of boleros and samba-canções. Boleros translated from Spanish were still strong and singers such as Carlos Alberto sold albums like hot-cakes. Altemar Dutra was the best of the lot with a better quality repertoire with only a few 'versões' (translations) which in Brazilian parlance meant a much better quality material. Brazilians are Latin-Americans all right but we are maybe a little less dramatic than other nationalities so our boleros are a little more 'contained'.

N.B.: The charts posted here are mostly copied from weekly Intervalo magazine which published IBOPE's (Instituto Brasileiro de Opinião Pública e Estatisticas) list of best selling singles, extended-plays & albums which are usually regarded as 'fair-dinkum' (closer to the truth) as Australians would say. But I have also posted some lists copied from monthly 'Melodias' magazine which is pretty close in accuracy to Ibope's. I have also added a list of LPs + mais procurados em São Paulo (best sold albums in São Paulo) which I copied from weekly Revista do Radio magazine. Revista do Radio's record researches have not been regarded as the best. Actually one can see that if a record company advertised in the magazine there was a trend that albums (or singles) from that particular company would start 'soaring' in their charts. Anyway, I decided to include their album's chart. Even though there are instances of utter disregard for truth and reality I have come to the conclusion that most of its charts is actually close to what was then reality. Then why worry?

By 1965, all Brazilian record companies had discontinued their production of 78 rpms (rotation per minute) records. Even so 'Intervalo' kept on printing the word '78 rpms' in their charts. I substituted the term '78 rpms' for 'singles'. As far as I know the last 78 rpm record to reach Number One was Chantecler's Bobby Solo's 'Una lacrima sul viso' in early 1964. 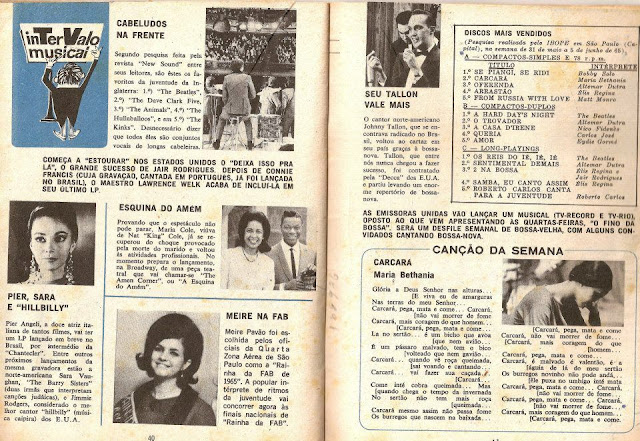 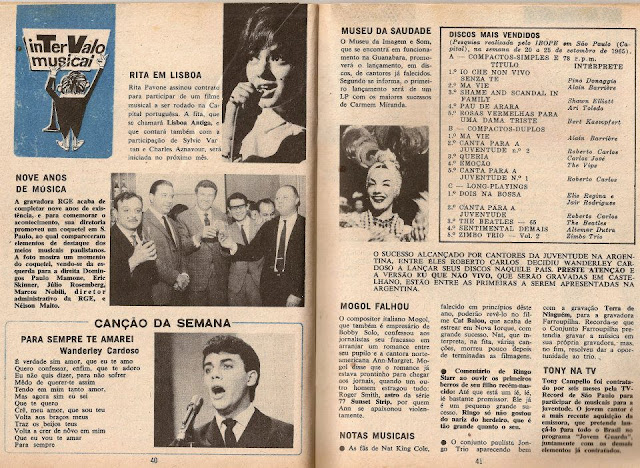 Intervalo no. 145 (17 October 1965) where the best-selling lists were published weekly. 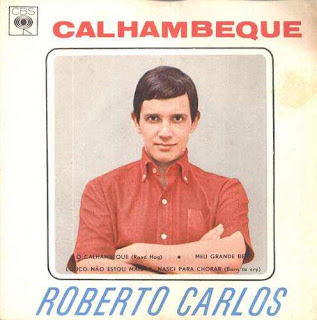 Even before 'Jovem Guarda' (Young Guard) started (22nd August 1965) Roberto Carlos had made up his mind to straighten up his hair and let it fall on his forehead. Look at his 'new look' on the cover of 1964's album 'É proibido fumar'. His hair wouldn't budge but hairsprays were brought in to make it stick... and the look stuck as well.
Roberto Carlos knew he had to link his image to that of the Beatles, so he straightened up his curly hair and let it fall on his forehead. Next thing he ordered a suit just like those the Fab-4 used to wear. Yes, those collarless jackets were so cool. 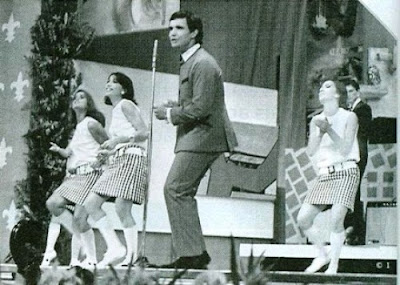 Here's Roberto Carlos with that suit he copied from the Beatles, singing at 'Jovem Guarda', his rock show at TV Record that copied US's 'Shindig' with those dancers doing the same routine. 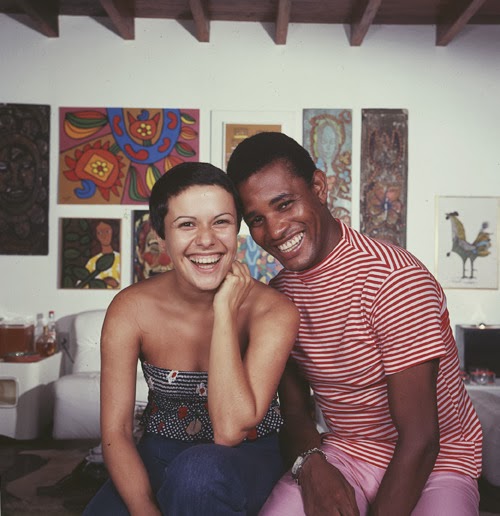 Elis Regina & Jair Rodrigues (here in a coloured-picture shot  in 1969) were really hot after their show produced by promoter & DJ Walter Silva at São Paulo's Theatro Paramount was recorded live and released by Philips.
Posted by Carlus Maximus at 14:04